A Trip to the ER … from a remote island 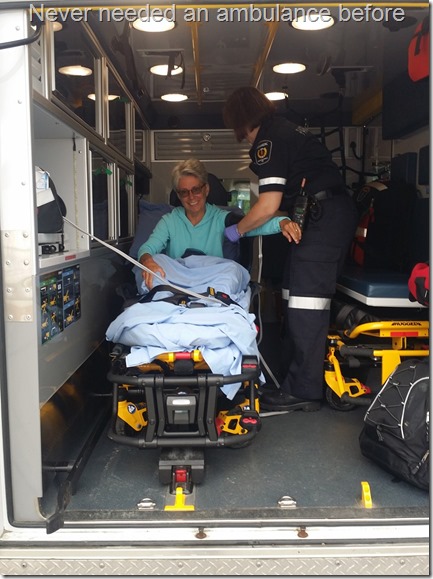 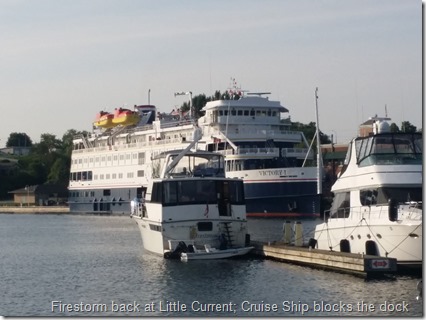 During the night, I woke up with pain in my back. I assumed it was a muscle spasm; went back to sleep. Later, probably around 3am, with more intense pain had wrapped around my entire left side. By 4 or 5 am, I was in severe pain; no one on the boat was asleep any more. Pain just kept getting worse. By 6:30, Rip couldn’t stand watching me in such pain and not being able to help; but, knowing I needed help and soon … woke up Laurie & Mike on Firestorm, our buddy boat for quite some time, to come to my aid. They are both trained paramedics & firefighters. I cried the pain was so excruciating; never had done that before. Their analysis was a kidney stone and knew there wasn’t anything they could do; but, I needed immediate care. They also knew not to give me anything for the pain so as not to mask anything when I did reach help.

Mike tried 911, but we were in the Benjamin Islands, the North Channel, Ontario, Canada … quite remote to say the least. They said, call back when you are on land. We hailed to Canadian Coast Guard, but had to call them on mobile, as the VHF transmission was too far out to hear us well enough. Luckily there was cell service, many of the anchorages thus far have had no signal. Finally, Coast Guard said they had “no assets” in the area to help me. Not sure what happened to the Coast Guard ship we passed coming into the Benjamin Islands. 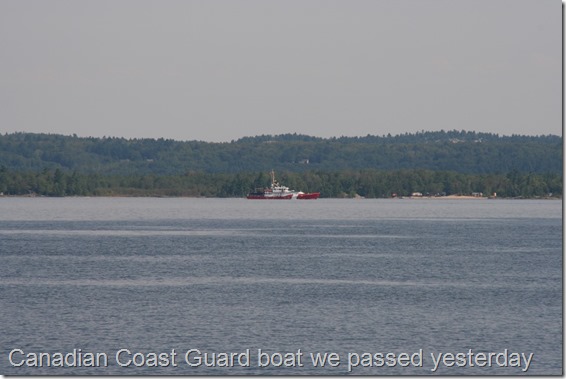 Mike jumped in his dinghy and raced over to Gypsie’s Palace & One Eye Dog. 2 Looper boat buddies, who happen to be anchored in the same anchorage. We had just finished rocktails with them, and others, a few hours ago. Anyway, both have much faster boats than either Firestorm or Lab Partners. Larry & April on One Eye Dog were the fastest and immediately, jumped to my aid. I was moved from our boat to Gypsie’s Palace with Laurie by my side (the whole time), then to One Eye Dog. Gyspie’s was easier to get on from the dinghy and One Eye Dog was rafted to them. 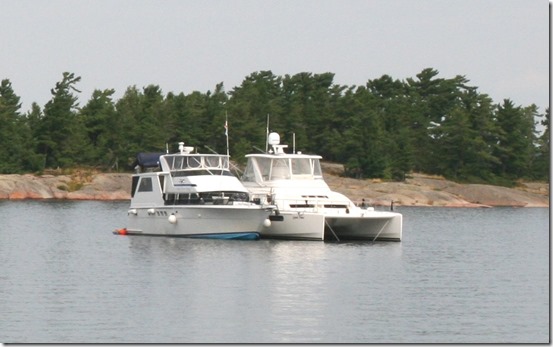 One Eye Dog only had to untie lines, as they didn’t even have an anchor down (Gypsie’s Palace was the anchor for both when rafted) and we were off. 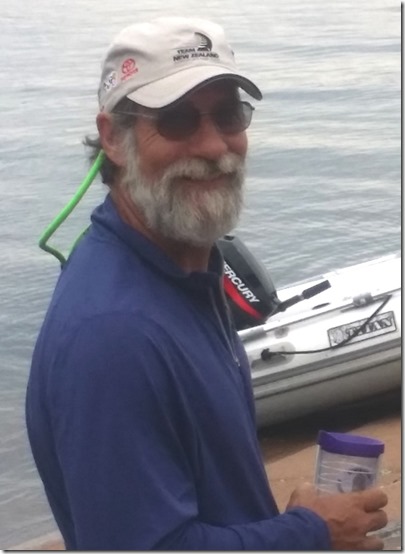 Captain Larry roared the boat to life and off we went as fast as he could go; From the Benjamin Islands back to Little Current in 50 minutes (where we just left 2 nights ago) - Little Current was the closest hospital over 20 miles away.

The Coast Guard kept in contact with One Eye Dog; they cleared the small channel coming into Little Current, so Larry could drive straight thru at full speed. Upon arrival at the docks, an ambulance was backed up & waiting with a stretcher out for me. I think Larry enjoyed the mission to go FAST (not wanting anyone ill, but it had been a while since he got to really go fast). What a great, easy ride and in under an hour! 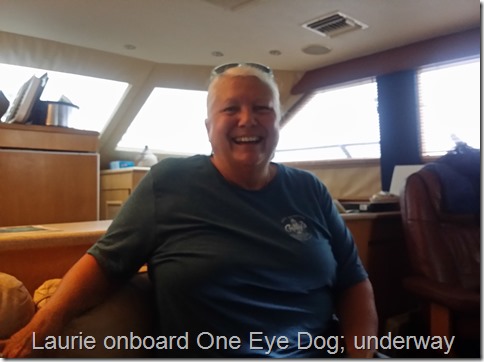 By this point, things had subsided a lot. The pain came in waves; I was between the waves. Another wave hit once I was at the ER being evaluated. 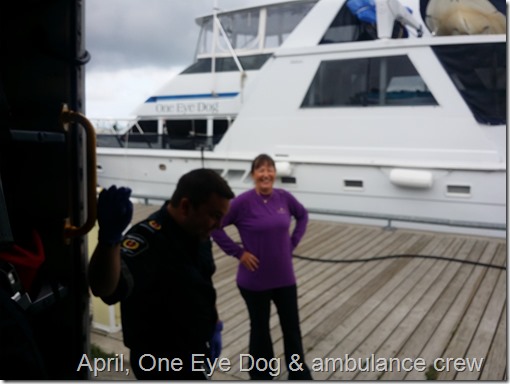 One Eye Dog, refueled and left to go catch up with Gypsies Palace and head off to their intended next anchorage.

After being thoroughly checked out, including an Ultra Sound … diagnosis was exactly as Laurie predicted … a kidney stone, but no blockages and no stone in sight, so at least it was small. I was released, given meds to take if and when the pain came back … but, “don’t leave the dock for 24 hours of no pain”. Then, the doc told us all the other places between here and Drummond Island (USA) that had hospitals, should the pain arise again after we left.

Back at the boat … we think the stone passed. Hallelujah! So, no pain 24 hours later … we (Lab Partners & Firestorm) left the dock and headed east again.

Fingers crossed … so far, three days later, no more pain and we hope all has passed. I have meds should it flair up again. Rip is also double checking I drink more water and that I stay hydrated!

I must say, it was so nice to completely trust all these people & let go of any decision making … Laurie & Mike to know what to do medically, Larry & April to get me to help fast and safe and Rip to analyze the overall picture and tell me what to do.

To say I am overwhelmed by the generosity of all the people who helped me is an understatement. However, it is what I know to be true of Boaters and of Loopers! We are all in this together. I cannot begin to repay Larry & April on One Eye Dog, nor Laurie & Mike on Firestorm … but, I can pay it forward! 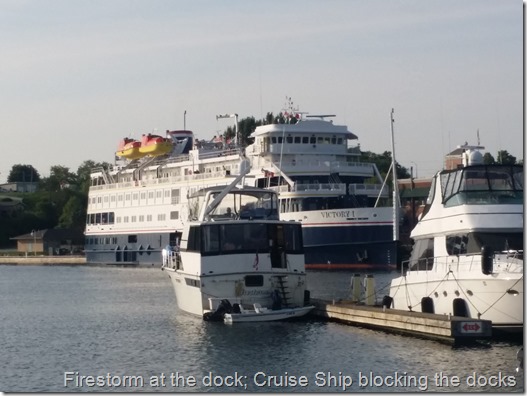