Day 81 ... July 10, 2017 ... 9.26 miles and 7 locks in 5 hours
Peterborough Lock 20 to Lock 26, Lakefield, ON.
Today was the day for the famed Peterborough Lift Lock. Built in 1904 and still the tallest or highest hydraulic lift lock in the world at 75'. First, we locked thru lock 20 which was right in front of us, having tied to their wall for the night before. Firestorm, C Scape, Shell Belle and us locked thru 20, then headed to the big lift lock. It seems a little intimating, but real is easier in that no water moves the boat. The entire "pan" of water with the four boats is lifted like we were on an elevator. It was very quick! Unfortunately, due to my error, the video of going up didn't record. We only have entering the lock and getting set before it started to rise.


After the lift lock, we had about 7 miles and 5 locks. Very tiring for all. Lots of current, from the record high water around here, making things that much more intense. Again Rip did a great job easing the boat where she needed to be, reacting to the changes in flow from the dam water currents and settling us by the wall so I could grab the cable with our lines and get the boat secure to the walls. With my limited height and limited arm reach, Rip has to get us really close for me to be of any help.

On one of the earlier locks today, I secured the bow line to a cable but didn't grab the stern cable in time, the wind got us and the stern drifted into the middle of the lock. Rip had to correct my error to re-position the boat, get the stern to move over towards the wall for me to try again. He did a great job, all while the 4th boat was waiting to come in beside us and tie to the opposite wall. Things were tight all day with four boats filling the lock each time. After this mishap, Rip decided to change up how we did things. Now, I grab the stern line and secure it, then head to the bow while Rip controls the bow, with bow thruster, so I am able to reach that cable and secure our line back to the boat. Once all this is down, Rip can head down from the fly bridge, turn the engine off from the salon station and then monitors/controls one of the lines. Rip usually takes the bow and I usually take the stern. I think things went smoother with this change. 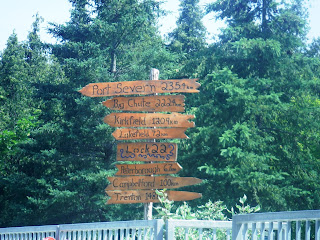 None of the regular locks were very high today, 10-16', but lord did they seem to fill slow. By the time we got to our destination, it was 2:30 (we started at 9) and were wiped out. A beer in the park setting with Firestorm under the shade of the trees was in order. More boats came in by us and others came through and moved on to another wall or more likely the nearby marina. All, in all, 10 boats are docked here tonight, 5 of which are Looper boats, including Moon Shadow, Cork Screw, Firestorm and Lab Partners. Talking and helping boats tie up ... we forgot to eat lunch, so it was an early dinner. I am sure it will be an early night as well.

The plan was for a run to Lock 31 Buckhorn. When we arrived at Lock 30/Lovesick, they called ahead to Lock 31 ... they had space for both boats. So we left there, our back up plan; by the time we got to Lock 31 the boat, a friend/Looper took the last space. Now, where to go?


There was a marina there we knew was full. We called hoping someone had cancelled, no luck. Not finding any areas on the small lake after Bobcaygeon where we could anchor and get Cally to shore, we called the marina and asked if we anchored out, could we bring the dog to shore once tonight and once in the am. Gal on the phone hemmed and hawed, finally said, "the marina really doesn't like dogs. They spend a lot of money on making things nice and don't want dogs to mess it up, so I have to say no to bringing dogs ashore here.
Finally decided we had to push on to the next town and lock, a couple hours further ahead. Knowing the next lock is popular and busy we were worried about finding space on the wall so late in the day. We called a marina there to see if they could accommodate us tonight. We had a slip reserved for the next two nights. Marina owner/manager promised she could squeeze us both in!! Winner, winner!! Amazingly Cally didn't make a peep about the long wait to go potty. She did however speak up once we were tied to the dock.

So, after lots of days running, lots of locks and lots of town walls we are back at a marina; time for laundry, grocery run and chores.


Dinner out with Firestorm!