It's cold this am ... 58 degrees, raining and it is the middle of July. I have on flannel lined jeans, a t-shirt with flannel long shirt over it.


A short run today to another popular lock close into town. It rained overnight and then again this am, mostly stopping by the time we could fit into the first lock, which was right by the marina where we stayed the last two nights. A call over to the lock let us know how long to wait before heading over. As close as we were, we still couldn't see the lock. He had several boats going up, need to lock down a big house boat and then several small cruisers up before taking us. Once we saw the big houseboat come out, we could go over the the "blue line" to wait our turn. The cruisers went into the lock as the house boat came out ... allowing us to take their spot on the blue line. The blue line is painted on a lock wall and those at the blue line signal to the lock guys you are ready to go.
We crossed Sturgeon Lake and entered into a narrow passage lined with homes and boathouses, then to the lock. We skipped lock 33 as it is a side trip and not on the direct path of our planned route. They were backed up, so we waited in the Canal area for maybe 25-30 mins. As the boats on the lock wall, blue line and not blue line, were called by overhead speaker into the lock, we were able to take their place on the lock wall. Firestorm was able to squeeze into the lock before us. They were the last out of their group in the lock and we would be the first out of the lock group behind them. They found a spot for themselves and us ... and with power!! Double score!!


Another cute town ... some pics before it started raining again.
Tomorrow Cally and I will go wandering and see what there is to see here. 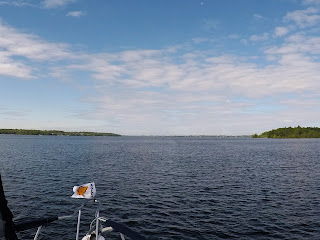 At lock 35, the first one today, we were at the highest point a boat can go on her own bottom at 841' above sea level. After #35, we will go down in the locks until we get to the Georgian Bay... including the OTHER Lift Lock #36, only now we will go down ... so peering over the edge of the pan is so cool.

This is a very rural setting, no town; not even a public road for access. We joined lunch makings with Firestorm for burgers, hot dogs, etc by the boats in our little private park. this was so nice, we all grilled out together for dinner, too.

Day 87 ... Sunday, July 16, 2017 ... 20.4 miles, 2 Locks in 3:10 hours
Lock Wall 40 to Port of Orillia
We planned on a leisurely start, but with afternoon thunder storms predicted, both Captains and crew readied ourselves for locking through first when they open at 9am. This meant turning Lab Partners around in the tight lock wall/canal area to face the lock gates.


We locked down 2 locks and then crossed Lake Simcoe, the largest Lake on the TSW. Thanks to Firestorm we have new running shots of Lab Partners. Guess we should have pulled the fenders on board. Oh, well. In normal cruising we never run with fenders down, but with all the locks and so many so close together everyone leaves all the fenders down (both sides). Not pretty, but effective! 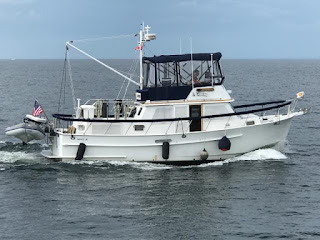 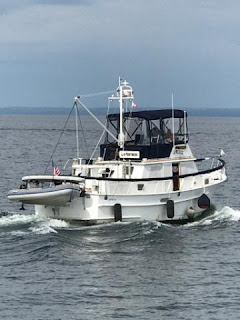 Just as we were leaving Lake Simcoe, it down poured on us going thru a narrow passage then cleared as we approached the marina.
Once settled in and the shore power connected for AC, the sky let loose again and it really rained hard for a while.
Port of Orillia looks like they are trying to be Port Trent Marina (the really nice one) ... but they are really lacking in execution and in helpful personal. First off they having FOLDING CLEATS. WTF?? As we pulled into our slip all the cleats were down. NO marina staff out to help us (FIRST time no one helped). Luckily, Marshall from Let's Go saw us and came over to raise our cleats so I didn't have to jump off the boat with a line and secure us. Firestorm came in right before us and had no one to raise their cleats. Luckily, there isn't current in here (nice break water walls at the entry) and no wind when we arrived.

The park setting, which is mostly for locals, is MUCH larger than most we've seen along the way and quite impressive. The marina boaters facility, though very new, pales in comparison; it is nice, but a poorly executed version of Trent Port Marina, IMHO.
However, town is near by and ice cream VERY CLOSE!!