On the Move Again and Electronics & Toys on Board

Day 22 ... May 10, 2017 - 40.5 miles traveled in 5 hours, 29 mins
Time to leave Hartge Yacht Harbor and move north again. Today we moved north of Annapolis, north of Baltimore to an anchorage on Worton Creek. Why? Well, it's free AND there is a nice beach for Cally to run and play.
This means passing Thomas Point Lighthouse, Annapolis and passing under The Chesapeake Bay Bridge. 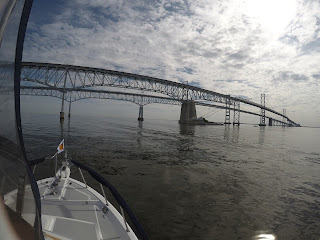 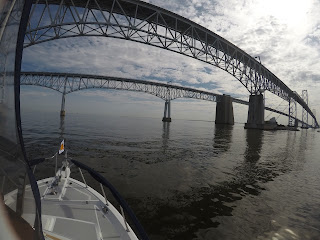 Cally goes to shore 3 times a day when we are traveling. The last trip to shore in the dinghy is called "last call" to get her conditioned there isn't any more shore duty until morning. Tonight, despite my best efforts she wouldn't go #2 on either the afternoon or last call run. She doesn't like going #2 on sand. She will tinkle on beach, no problem. So, the girl held that until the next morning run. I took the dinghy to a different section where I saw what looked like phragmites hoping that would suit her. Winner, winner. BUT, she is going to have to learn to go on sand sooner or later. there won't always be grass for her.

We arrived in sunny weather; left in  dreary conditions.

Day 23 ... May 11, 2017 - 23 miles traveled in 2 hours, 25 mins
We pulled anchor and headed to Bohemia Bay Yacht Harbor on the Bohemia River. Despite emailing the general manager two days earlier of our plans to come in (confirmation received) and 2 phone calls this morning as we traveled ... they were completely unprepared for our arrival. Needed to go scout out a slip for us. They had us pull into the fuel dock to wait. Luckily, we did need fuel (165 gallons) and a pump out. So, all was not lost. Still, that's just not good service. It does make it quicker when we leave not to have to stop for either. GREAT dock hand and all else has been friendly and helpful.


We will be here for 3 days waiting out winds and heavy rains that are due thru the area. Hopefully, we can head out on Sunday. Next travel day will be the C&D canal which connects the top end of the Chesapeake Bay and the Delaware River/Delaware Bay.

At the helm, Rip has the Raymarine chart plotter plus a Windows 10 tablet, both running navigation programs.  It is nice to have one zoomed out and one zoomed in closer when approaching inlets, marinas, etc.


There are lots of other electronics, too many to remember. I have two iPads, Rip has 2 tablets (can you say BACK UP) and we each have our Laptops on board. We have a hand held wind meter, our In Reach tracker that shows where we have been (link on this blog on the right side and where we are at any point, and so much more.
For FUN ... We also have a Go Pro on board.